Dear people whose job it is to collect & analyse personal data from the membership of the Labour Party,

Labour Women’s Declaration hopes you followed the court hearing on 9 March – Fair Play for Women versus Office for National Statistics – challenging the ONS guidance on how to fill in the sex question in the 2021 Census.  A full judicial review was due to take place this Thursday, 18 March, so that the case could be heard as a matter of priority before census day, but the judge made an interim order instructing the ONS to immediately remove the incorrect guidance on the sex question, saying he was satisfied the campaign group Fair Play for Women was “more likely than not to succeed” on its case regarding the legal definition of “sex”.

Today we can confirm that Fair Play for Women have indeed succeeded and that the ONS has conceded that the proper meaning of sex in the census means sex as recognised by law. The High Court has now ordered  that “What is your sex?” means sex “as recorded on a birth certificate or Gender Recognition Certificate”. The substantive hearing listed for 18 March is vacated and ONS will pay costs of both sides. This is a victory for the women’s movement, and all the women and organisations that got behind the Sex in the Census campaign to ensure women’s sex-based rights are upheld through accurate data collection, including Labour Women’s Declaration.

We were watching to see if there would be any reaction to all this from the Labour Party, since many of us have complained after discovering what you had done with our online membership details. The outcome in the census case demonstrates that collecting clear data on sex and gender identity should be the gold standard, as it gives organisations accurate information about respondents that is important to policy development.

Until a few days ago, members’ online membership cards used the phrase ‘gender identity’ which has now been altered again to ‘gender’. Many women members have been angry about this and have contacted us to say they have complained but received no response. We also note that this issue is being discussed in public forums such as MumsNet and Twitter. We question the right of the party to retrospectively change data given by members without any consultation or permission.

We would argue that unless a specific question on sex is asked, it is not possible to  know how many women members we have. This is also important in that by the provisions in the Equality Act, there is an equality duty which covers the protected characteristics. Sex is one of them, neither gender nor gender identity are such characteristics. It may also be useful to know how many members wish to identify as having a gender identity, but the way this form is currently phrased, it doesn’t give us that data either. The merging of sex and gender undermines the ability of our data collection systems to elicit the information we need to pursue the equalities agenda.

One member within our networks began emailing the Labour Party’s Equalities office on precisely this subject on 01.07.2019. Although she did manage to get some response within the thread of emails, her last email has as yet, eighteen months later, still not been answered. Redacted copy of her full correspondence can be found here. We are including the following excerpts because we believe the responses she received fully illustrate the confusion and lack of clarity coming from the Labour Party administrative staff on this very important aspect of data collection. To put it bluntly, no one seems able to explain what exactly is meant by the terms in use and how they are being used, let alone understand the impact on the data.

Taken from her communication with Labour Equalities, are the following excerpts beginning with a response she received 2 months after her original email enquiry.

Thank you for your email dated 1 July and apologies for the delay in getting back to you.

I asked my colleague >>>>>> to provide the best response to the questions you raised in your email. Her response is below:

The “Gender” questions you refer to clearly refer to gender and gender identity so the Party continues to log data on gender/sex. Since around 2006 we have logged data on our membership systems for male, female and other (as well as unknown which is usually used where we have no data as an individual has not completed that part of the application form). All data previously captured has been retained and all new data is still inputted using those categories. During the Democracy LGBT activists said they did not want LGBT data captured on our systems.

I hope this answers your questions.

If you have any more questions further to this email, >>>>>> (CC) will respond when she returns from annual leave.

Thank you for your reply.

So can I, perhaps, refer you back to my originating email to ****** of 1 July 2019? Could you please have a look at the preamble to my questions to better understand the context for them?

In the interests of clarity, and to avoid any possibility of misunderstanding or misrepresenting the Labour Party’s position on these important issues for women, I have attempted to translate your paragraph of answers into specifics under the six questions in my original email (in bold).

I have also attached a copy of the Gender question to which this Correspondence refers.

You reply that you understand gender to mean ‘gender and gender identity’. You then say that ‘the party continues to log data on gender/sex.’ You therefore imply that if somebody of the male sex self-identifies as a woman and ticks that box, that for statistical purposes, the Labour Party will count their sex as female.

2. If it does mean Gender Identity, why doesn’t it say so? Clear definitions are important, especially when we know that in some situations ‘Gender’ is used as a synonym for Sex.

You do not seem to have explained why it says Gender rather than Gender Identity. In many situations Gender is used as a synonym for Sex so this is, at best, misleading.

3. Previously, the Labour Party asked its members whether they were male or female. Is this new Gender question an additional question, or a replacement for the one aimed at determining sex?

You are saying that this is a replacement question for the one that was previously, and clearly, aimed at determining sex.

4. If members have previously declared their sex, has that data been retained?

You have confirmed that the previous data with regard to the sex of members has been retained.

5. If members select just one of the boxes, in three out of the five possibilities to tick, there is no way of knowing whether individuals are female or male. Could you explain how that relates to identifying possible discrimination against or disadvantage to women on the basis on Sex, which like Race and Disability, is a protected characteristic in the 2010 Equality Act?

You have agreed that you have no way of knowing whether individuals are female or male, since a member can complete this form on the basis of either Gender (in the old-fashioned sense as a synonym for sex) or Gender Identity, self-selected. My question pointed to the fact that three boxes, Trans, Non-binary, Other, could be filled in by both sexes. Your answer indicates that in fact the other two boxes, Man and Woman, could also be filled in by either sex. You have not answered my question about the relationship between this data gathering and the identification of discrimination on the basis of sex as per the 2010 Equality Act. However, the implication is that this data could no longer be applied to those purposes.

The Labour Party has stopped collecting data on sex, and has replaced that with data about Gender Identity.

Finally, I was interested to hear that LGBT activists do not want their data captured on Labour Party systems. In that context, why would the membership form ask for Gender details that include Trans and Non-Binary?

I would be grateful if you could confirm that my summary of your reply is as you intended. Or perhaps you could provide some further clarification?

I look forward to hearing from you or >>>>>> at your convenience.

We know that many women have complained about the way that a gender identity has been allocated to them by whoever is administering data collection in the Labour Party, and we find it insulting that there has been a complete lack of engagement with these members to correct the errors and issues that have been clearly pointed out. That the word ‘identity’ has been deleted from the online membership card within days of the ONS judgement is remarkable, given the lack of response to women members.  Does it really take expensive court cases for the concerns of our members to be taken seriously? Messing about with membership details and using the language used to erase sex as a category should not be being undertaken lightly and without consultation. A full understanding is needed of the consequences  of such meddling for data collection, security and the impact on our equalities duties and work.

Since the last email from this member in September 2019, the Labour Party Manifesto pledged to deepen the understanding of and enforce the provisions of the Equality Act 2010, but we can see no evidence that this is being done, rather, the reverse. 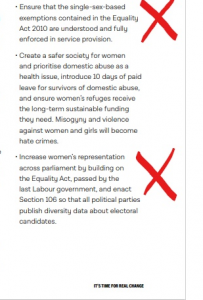 We draw your attention to the following extract from the Welsh Government’s commitment to data collection in it’s recent Manifesto.

“Welsh Labour will ensure that data collection by Welsh Government and other public bodies use the characteristics protected under the Equality Act 2010: sex, race, age, disability, marriage and civil partnership, religion or belief, sexual orientation, pregnancy or maternity, and gender reassignment. This will ensure that it is possible to measure how successful Welsh Government is in supporting public bodies to meet their duty to ensure equality of outcomes for all.”

We would also like to address the issue of the collection of data from other protected groups. We understand that the policy not to collect data on the basis of sexuality was made after consultation with only one group – LGBTQI+ Labour who cited security concerns. This approach was questioned by many lesbians and gay men at the time, as many organisations have collected such information over many years without any issues. As a result, LGBTQI+ Labour remain the only group available to be consulted around LGBT+ issues and the information and data from our members is missing. This group is an affiliated lobby group, not a members’ group and cannot be said to speak for lesbian and gay members nor to be allowed to replace direct communication with our members. Lesbian and gay members are also protected under the Equality Act, as are those who are ‘gender reassigned’. If the party is to exercise its duties and aspirations in regard to equality it is vital that the appropriate data is collected and that members are directly consulted.

We hope, therefore, that you will consider all the points we have raised and ensure the development of comprehensive data collection which does not omit groups who experience very real and specific discrimination. A policy is urgently needed which is based on the well-defined, legally-established characteristics in the 2010 Equality Act, which will update the Party’s systems and governance in the light of that Act and that would also be consonant with the aspirations and principles which we believe lie at the heart of Labour Party.