Statement in response to the EHRC intervention 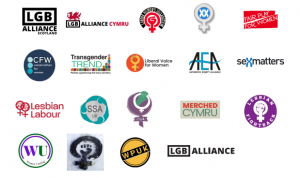 We are delighted to sign this joint statement welcoming the two recent responses of the EHRC –  to the Scottish Government’s proposals for  Gender Recognition Act reform and to the UK government’s Conversion Therapy Ban Consultation.

“The Equality and Human Rights Commission’s response to the UK Government’s Consultation on conversion therapy and its letter to the Scottish Government about reform of the Gender Recognition Act are a breath of fresh air.

The Commission has called for careful and respectful discussion of potential changes to the law and asked all Governments to take the time needed to ensure that definitions are clear, and that the policy is evidence-based.

The EHRC’s mandate is to challenge discrimination, and to protect and promote everyone’s human rights. LGB (lesbian, gay and bisexual) and women’s grassroots organisations have for the last few years been raising the alarm at policies, advocated by gender identity activists, which only recognise the rights of one group.

Protecting human rights often means balancing the interests of people with different protected characteristics. Legislators and regulators must listen to the views of all and not favour a particular lobby or allow one group’s interests to destroy the rights of others. As the EHRC have stated, the established legal concept of sex is a critical underpinning to all our rights; including those of LGB people, women and people who identify as transgender.

The EHRC has clearly listened to our voices. For this we thank the Commission. For our part we will continue to lobby all Governments to focus on what any good law requires – open debate, broad consultation, human rights impact assessments, clear language and proper regard for evidence.”